Posted on 1 May 2020 by malahidecommunity

Unfortunately, social distancing is likely to be with us for the foreseeable future. Those of us who shop in Malahide village will have found that social distancing can be difficult to do when queuing outside shops, or attempting to pass queues that form on footpaths outside shops. Some people are stepping into the street which can put themselves in danger.

As you can see from the Google Street view image above, New Street currently has four road lanes, parking on both sides and a narrow footpath on each side.

On Saturday 26th April, Fingal county council published a plan to facilitate Social Distancing in the Public Realm across Fingal. New Street Malahide is one of eight initial locations identified across Fingal. New Street will be temporarily closed to traffic, with the exception of access for deliveries and emergency services. Parking will also be temporarily removed from the northern side of Main Street, from The Diamond to the junction with Townyard Lane – outside Bank of Ireland, Supervalu, Kerrigans etc.

While no date is indicated, it is likely that these temporary changes will be implemented quite quickly. The council will monitor the changes for effectiveness.

The Malahide forum has asked member residents associations for feedback which we will pass to Fingalcoco. Based on initial feedback, we will be asking Fingalcoco to facilitate social distancing:

The proposed temporary changes will pose challenges for retailers in the village. As a community, we can help by shopping local at every opportunity.

So what will a pedestrianised New Street be like?

In 1982, Grafton Street was fully pedestrianised after a prolonged trial period that started in 1971. (see RTE report). Traders in the area initially resisted the idea. Could New Street become the Grafton Street of Malahide? Only time will tell.

Posted on 30 March 2020 by malahidecommunity

It’s great to share a good news story in these challenging times!

There’s now a brand new footpath connecting Ashwood Hall on the Back Road to the playground entrance at Malahide Demesne.

The timing could not be better, as due to COVID-19, all car parks in Malahide Demesne have had to temporarily close, and visitors are required to enter on foot, by bicycle, or by scooter as in the photo.

There’s also a new set of pedestrian lights (which we hope to see activated in the coming weeks) at Ashwood Hall, enabling residents to cross the increasingly busy Back Road where some drivers are unfortunately exceeding the current 60km / hour limit.

The new infrastructure was installed thanks to the efforts of the Ashwood Hall residents who contacted Fingal county council explaining their need for the path and pedestrian traffic lights.

The Malahide Community forum would like to thank the Ashwood Hall residents and the staff in Fingal county council for making this happen. It demonstrates the power of residents coming together. It illustrates how effective communication and cooperation between residents and Fingal county council helps us make Malahide and Fingal an even better place to live, work, visit and do business.

As we’re learning in this COVID-19 emergency, we’re all in this together.

Posted on 26 March 2020 by malahidecommunity

Here are the notes from our March 2020 meeting. (Limited attendees due Covid-19).

The notes of our previous meetings are available on our monthly notes page.

Posted on 24 March 2020 by malahidecommunity

Our sense of community in Malahide has long been one of our greatest attractions. In the challenging time ahead of us, it will be our greatest strength.

Local clubs have already stepped up to the plate. St. Sylvester’s GAA club has established a volunteer team to assist those who need help with daily errands (call 086 174 3088).

Enjoy Malahide is helping to keep us informed with well moderated messages on their Facebook page.

The Malahide Community Forum has asked each residents’ association to contact their members to ensure they’re OK.

Many older residents do not use the internet for information. We ask residents to phone elderly neighbours to keep up their spirits, help them with groceries and inform them of resources including:

We’ve been told by Tony Holohan, our Chief Medical Officer, that we’re still in the lull before the storm. If you don’t’ currently have a residents association, act now, while you have time. Keep it simple – set up a WhatsApp group. As Dr Michael Ryan of the World Health Organisation says “Speed trumps perfection”.

When this crisis passes, you may find this Residents Association Handbook  helpful.

Please, protect yourself and others, especially the more vulnerable members our community by maintaining physical distance, washing  hands and following HSE guidelines.

Posted on 23 March 2020 by malahidecommunity 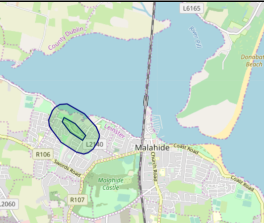 Works are scheduled to commence at 10.00am and are expected to take 4 hours to complete.

Posted on 28 February 2020 by malahidecommunity

Earlier this month we wrote to NAMA expressing our concern about the impact an en bloc sale of Casino Apartments would have on step down accommodation stock in the Malahide area.

NAMA replied to us by email on February 14th 2020. Our step down accommodation sub-committee has considered NAMA’s response and replied to NAMA on Feb 27th.

Our response to NAMA notes that “NAMA requires that sales agents are appointed to openly market the assets and to ensure that the sales strategy employed achieves the best value for the asset type” and that “in certain circumstances, best value can be achieved through a bloc sale”.

To us the appropriate circumstances are very clear – it must be the best return for the State. A bloc sale should exceed the total value of direct sales to individuals.

In addition to the better financial return we’ve also asked NAMA to take into account the social benefits of facilitating the sale of these apartments to individual clients and thus adding to the stock of housing for Step Down and thereby increasing the size of the housing market for younger people.

We will be monitoring the outcome of NAMA’s decision in the interests of our community and the national interest, very carefully over the coming days, weeks and months.

Malahide Traffic Speeds – Have Your Say

Posted on 23 February 2020 by malahidecommunity
Do you know the traffic speed permitted on your street? Are you happy with it? What about speeds permitted through the village? Now is your opportunity to speak up.
Fingal County Council has launched a consultation regarding the traffic speed limits they will be implementing across Fingal in 2020. The closing date for submissions is March 20th. You may make an individual submission and / or through your residents association. 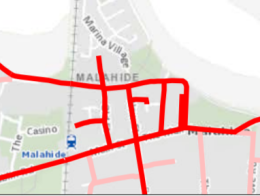 The Malahide Community Forum discussed the council’s proposals at our monthly meeting on Monday 17th February.  Based on the RSA statistics, the forum will be making a submission asking the council to apply a 30km/h limit to the entire village area, including Strand Court, Strand Street, Old Street, Railway Avenue, New Street, Townyard Lane, St. James Terrace, Main Street from the railway bridge through The Diamond to The Grand Hotel, Church Road from The Diamond to St. Andrew’s Church.
The map below shows the proposed permitted speeds beyond the village area. Do you see your street / area? Are you and your neighbours happy with the proposed permitted speed? If so, submit your support. If not, make a submission to request a change.
The consultation / submission process is here: https://consult.fingal.ie/en/consultation/road-traffic-speed-limits-county-fingal-proposed-bye-laws-2020

Posted on 11 February 2020 by malahidecommunity

Children in a West Cork school released this brilliant Rap song video after being shocked by the amount of litter they found when they went to help clean up local beaches.

Posted on 9 February 2020 by malahidecommunity

As the Malahide residents representative body, we’ve become increasingly aware of the lack of suitable step-down facilities in the greater Malahide area for our older residents, many of whom would be happy to trade down their family homes if suitable properties were available.

We’ve set up a Committee to examine methods to increase the housing stock available for step down and protect existing housing stock.

We’re concerned to learn that Gannon Homes Ltd, whose loans are controlled by NAMA, intend to sell off 37 Casino apartments en bloc to an investor. The effect of this would be to remove a significant lot of very suitable accommodation from this specific market.

We’ve written to NAMA to express our concerns and our support of the existing owners of apartments in the Casino in Malahide who are concerned about short term lettings and have been communicating their concerns to NAMA.

Posted on 3 February 2020 by malahidecommunity

Since November 2019, we’ve been supporting Fingal county council’s pilot “School Streets” project at St. Oliver Plunkett’s and St. Andrews primary schools. Initial results are promising – with a 50% increase in pupils using “active travel” – such as walking, cycling or scooting, and a 20% reduction in traffic pollution at a monitoring station near the traffic-free “school street” zone on Grove Road in Malahide.

Surveys in the schools show that a majority of pupils would like to cycle to school. We  believe it’s now time to provide safe, segregated routes to our schools, clubs and all community facilities. We’re lucky in Malahide to have so many facilities “on our doorstep”. Let’s make them safe and easy to walk and cycle to, especially for our children and grandchildren.  Here’s a brilliant ad from Tom Flood that says it all…

Having made a number of car ads for the #SuperBowl in a past life, thought I would make one for what we really need in our community. #SafeStreets pic.twitter.com/T4RNG6XxbJ